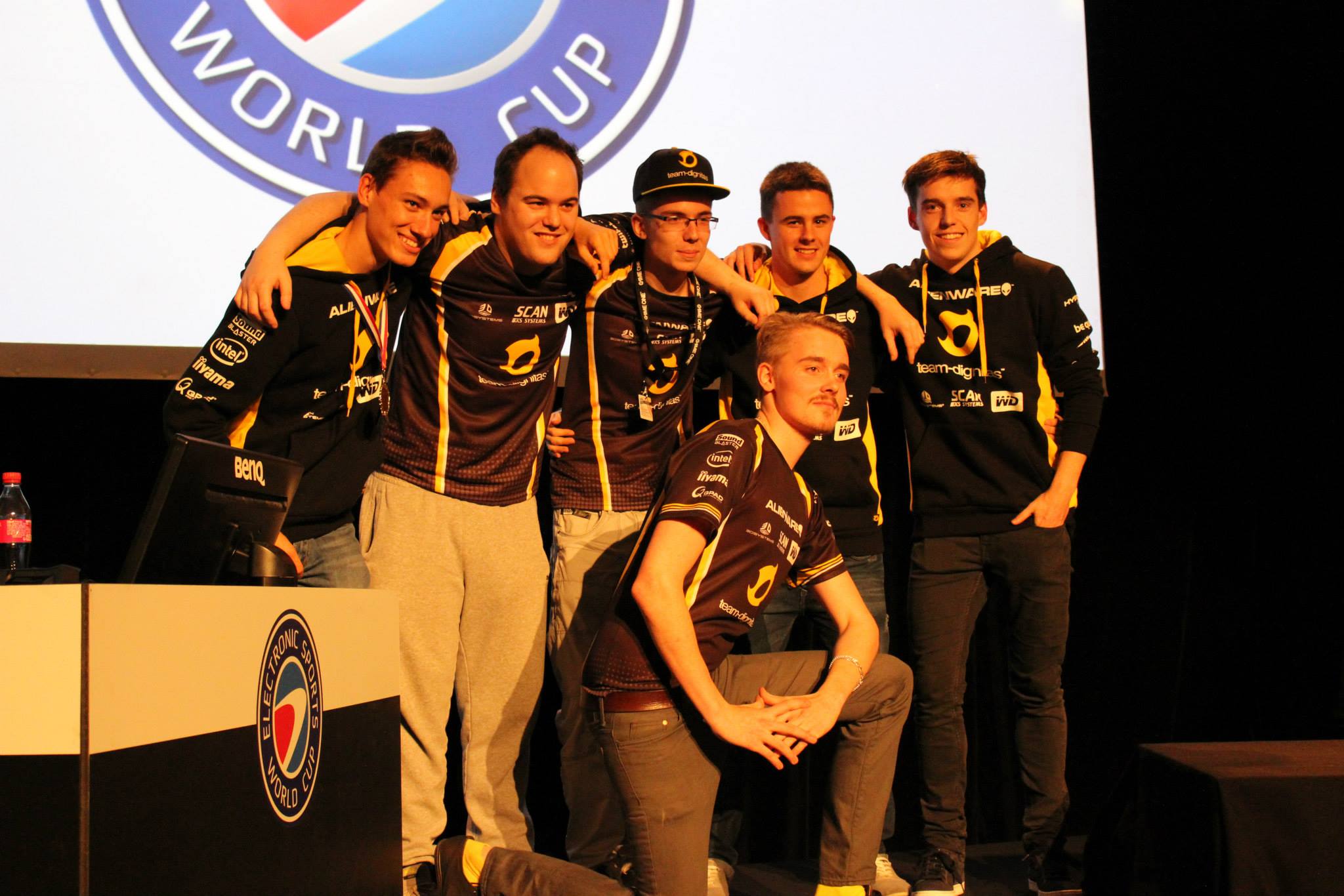 Team Dignitas 2014: Carl Jr., Bergie, Massa, JonNo, Spam (back left to right), Insane (front)
TM Masters: Bergie, after dozens of attempts you can finally call yourself a “True Talent”. At which point during TTC #56 did you know that you’re going to win?
Bergie: “I was really confident on two maps I guess, and when there were 15 or so players left, we had to play those two maps in a row. That one round where I crashed in the start and overtook a player in the end with 0.01 seconds is pretty much when I realized I had a good chance of winning. I felt pretty decent on all maps, but also when Flyer went out I knew I was the big favourite.”
TM Masters: As there were 4 players left, you had a “full-stopik” at the pole. Still, you didn’t get knocked out in this round. We are giving you the opportunity to thank Flyer here now, who got knocked out instead.

Bergie: “Flyer was loyal to me that round, so for that I thank him and hope to meet him in a 1v1 battle next TTC!”

TM Masters: The maps were kind of different this time compared to the other editions. Lots of players seemed to struggle on them, unlike you. You were seen lots of times in the Top 5 during the True Talent Cup #56.

Bergie: “For some reason I felt really confident this time, especially compared to last couple of editions. I quickly learned where I struggled and how to fix the problems I had, and that helped me a lot. Also recent Gamers Assembly training has gone great and that boosted my confidence going into this TTC.”

TM Masters: Lots of players are probably wondering now – how to become the True Talent. Is it a mixture of risking and safing, or what was your key to success last Thursday?
Bergie: “It is definitely a mixture of risking and safing. My experience with TTC has shown me that it is best to risk the first or second time you play through the maps, because that is when you can afford it the most. Safing is the best bet whenever you have a not so good start and others have already failed.”
TM Masters: In September 2014 you almost became a True Talent already, when you finished TTC #14 as 2nd with the same time like kubayz. Do you remember this scene and were you even more motivated afterwards that you finally want to be crowned as the True Talent?

Bergie: “This moment will go down as one of my all time “favourites” when the day comes and I retire from TrackMania. I dont think I have ever been as pissed before, I almost called Hylis and BabyRaged. It ofcourse motivated me even more, however the closest I’ve been since then has been five or six 4th places.”

TM Masters: Do you remember your first participation in TTCs?

Bergie: “I think I actually got 3rd in my first ever TTC. That was coincidentally the first time KarjeN participated as well (and the bastard won).”

TM Masters: Were you immediately convinced by that (back then) new format of unreleased maps and a knockout mode?

Bergie: “Yes, at first I didnt want to participate because I thought the format was shit. That was mostly because I didnt see myself as a fast learner, however I quickly realized how fun that mode is and it is very challenging. The best player wins 99/100 times.”

Bergie: “Well first of all TTC’s are a great time for me and my teammates/friends to hang around on TeamSpeak together and also play and have fun. Its kinda become a tradition and there’s a lot of honour and pride on stake (JonNoSup). Also the mode is fun and super exciting, truly brings the beast out in all of us.”

TM Masters: True Talent Cups will celebrate their 3-year-anniversary in June 2016. Do you have any wishes for the future, improvements, suggestions?

Bergie: “I wish we continue in the same way and hopefully with some more contribution from the community (more maps, maybe even some donations to keep the admins going and supporting their great work).”

TM Masters: Do you think that your first TTC victory gives you another motivation boost so that you can celebrate your second win anytime soon?

Bergie: “Maybe, but I dont play TTC to win, I play it to have fun and thats what matters to me. I enjoy playing TTC even if I get 90th, but time will tell if I can repeat the impossible.”

TM Masters: During True Talent Cups you’re in Teamspeak together with Spam, Wally and Carl Jr. and JonNo mostly. Beside JonNo you guys all won at least one True Talent Cup by now. What is your prediction, will JonNo ever manage to celebrate a victory?

Bergie: “JonNo will never win a TTC, did you even see his failure last time? If he wins a TTC I will stop drinking Pepsi Max for 1 month.”

TM Masters: Your team Dignitas is back driving the TM Masters Team Cup 2016. Is your team moviated enough to win this Team Cup for the fourth (!) time in a row?

Bergie: “We needed the long break we had with our absence from last CPS season. Now we are motivated and truly want to win Team Cup once again and show we are still the best. I genuinly think we will be unstoppable as long as we keep our motivation and spirits high.”

TM Masters: Thank you for your time and the opportunity to talk to you- we will hopefully still meet you on Thursday’s on the TTC server and we wish you and your team good luck at the Team Cup 2016!

Bergie: “Thanks for interviewing me, it came as a shocker upon me, but I appreciate the kindness and all the hype around my win. Hopefully I’ve put a smile on some faces with the many epic rounds and comments on TeamSpeak. :)”